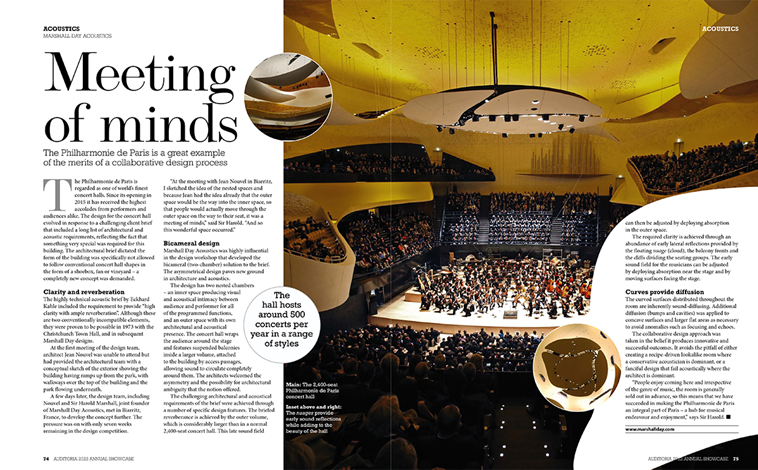 We are delighted to share this article which appears in Auditoria Magazine's 2022 Annual Showcase. The article explores the meeting of minds and outlines how the challenging architectural and acoustical requirements of the project were achieved.

The Philharmonie de Paris is regarded as one of the world’s finest concert halls. Since its opening in 2015, it has received the highest accolades from performers and audiences alike. The design for the concert hall evolved in response to a challenging client brief that included a long list of architectural and acoustic requirements, reflecting the fact that something very special was required for this building. The architectural brief dictated the form of the building was specifically not allowed to follow conventional concert hall shapes in the form of a shoebox, fan or vineyard – a completely new concept was demanded.

Clarity and reverberation
The highly technical acoustic brief by Eckhard Kahle included the requirement to provide “high clarity with ample reverberation”. Although these are two conventionally incompatible elements, they were proven to be possible in 1973 with the Christchurch Town Hall, and in subsequent Marshall Day designs.

At the first meeting of the design team, architect Jean Nouvel was unable to attend but had provided the architectural team with a conceptual sketch of the exterior showing the building having ramps up from the park, with walkways over the top of the building and the park flowing underneath. A few days later, the design team, including Nouvel and Sir Harold Marshall, joint founder of Marshall Day Acoustics, met in Biarritz, France, to develop the concept further. The pressure was on with only seven weeks remaining in the design competition.​

“At the meeting with Jean Nouvel in Biarritz, I sketched the idea of the nested spaces and because Jean had the idea already that the outer space would be the way into the inner space, so that people would actually move through the outer space on the way to their seat, it was a meeting of minds,” said Sir Harold. “And so this wonderful space occurred.”

Bicameral design
Marshall Day Acoustics was highly influential in the design workshop that developed the bicameral (two-chamber) solution to the brief. The asymmetrical design paves new ground in architecture and acoustics. The design has two nested chambers – an inner space producing visual and acoustical intimacy between audience and performer for all of the programmed functions, and an outer space with its own architectural and acoustical presence. The concert hall wraps the audience around the stage and features suspended balconies inside a larger volume, attached to the building by access passages, allowing sound to circulate completely around them.

The architects welcomed the asymmetry and the possibility for architectural ambiguity that the notion offered. The challenging architectural and acoustical requirements of the brief were achieved through a number of specific design features. The briefed reverberance is achieved by the outer volume, which is considerably larger than in a normal 2,400-seat concert hall. This late sound field can then be adjusted by deploying absorption in the outer space. The required clarity is achieved through an abundance of early lateral reflections provided by the floating nuage (cloud), the balcony fronts and the cliffs dividing the seating groups. The early sound field for the musicians can be adjusted by deploying absorption near the stage and by moving surfaces facing the stage. Curves provide diffusion The curved surfaces distributed throughout the room are inherently sound-diffusing. Additional diffusion (bumps and cavities) was applied to concave surfaces and larger flat areas as necessary to avoid anomalies such as focusing and echoes.

The collaborative design approach was taken in the belief it produces innovative and successful outcomes. It avoids the pitfall of either creating a recipe-driven lookalike room where a conservative acoustician is dominant, or a fanciful design that fail acoustically where the architect is dominant. “People enjoy coming here and irrespective of the genre of music, the room is generally sold out in advance, so this means that we have succeeded in making the Philharmonie de Paris an integral part of Paris – a hub for musical endeavour and enjoyment,” says Sir Harold.

Every two years MDA gets together with staff from offices across Australia, New Zealand, China, Hong Kong and France for a company-wide conference. This year was a bit of a challenge to bring everyone together in one place, so we did things a little differently by holding our very first virtual conference on Friday, 26 November 2021.