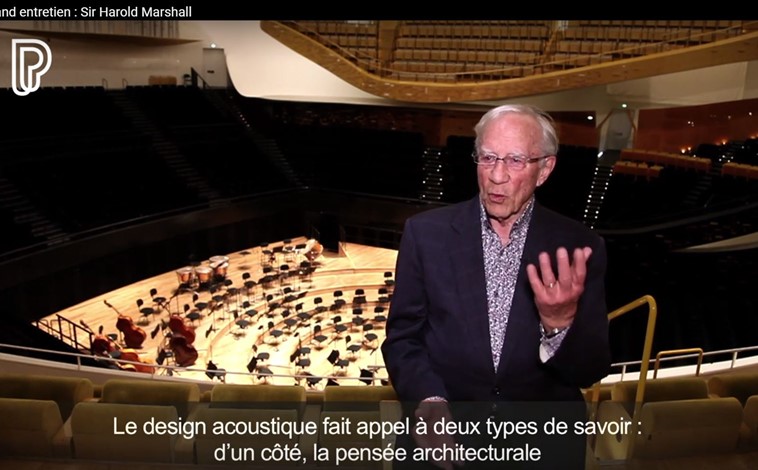 On a recent trip to Europe Sir Harold Marshall was interviewed by the team at Philharmonie de Paris. It’s a great pleasure to share the recording and transcription:

“Acoustic design turns on two different types of knowledge. On the one hand, you have the architectural thinking about what the space should be, what it wants to be and how the people are going to relate to it. On the other hand, you have the physical science of room acoustics and that is the study of how the sound behaves in the room and these two have to flow together so that you have a meeting of minds between the expert in room acoustics and the architectural expert who can think of what the room should be.

There are five different practical things that we make. I call these the nuts and bolts of making a room for sound. First of all, there is the musical dynamics. We have to make the room so it supports loud and soft and particularly that supports the pianissimo. These are magic moments when the sound hangs in the space like a whispered blessing and it doesn’t just turn into no sound. So that’s the first one. The musical dynamics.

The second one is clarity. Most people prefer to hear the detail of the music, so long as hearing the detail doesn’t obscure other aspects of the sound that they want to hear.

The third is the reverberation. That’s the long persisting sound in the space. In a room such as this it lasts for two to two and a half seconds, after the sound stops sounding and that’s the deep presence of the room. Every room has a presence like that but in concert halls it is particularly important.

The fourth one is that people like the feeling of being enveloped by the sound and this is a function that I had a large part in discovering in 1967; that the lateral reflected sound is hugely important in making the sense of involvement and envelopment in the sound of the orchestra.

And the final one, the fifth one, is the need to for the musicians to feel comfortable in the space so that they can play together in ensemble.

Those are the five nuts and bolts of room acoustics.

We have all the computer aids now that allow us to trace where the sound goes to from every surface so that every square centimetre of surface in this room is contributing to the impression at a particular seat. And it is particularly important on stage where the musicians are hearing one another and that is what we do. We trace where the sound goes to, we calculate it and we form the room with the architect so that all of those good things happen.

These surfaces here, near where I’m sitting surrounding the seating areas that are immediately behind me, you will notice that they have surface features, knobs and bumps. The reason for that is that if you are sitting close to a strong reflection you can have a false localisation of the instrument. It’s very disconcerting. I was in the Metropolitan Opera in New York and listening to a piece of music and suddenly the trombone was up here somewhere. It’s very disconcerting. So where the surfaces are close to the seats like this, we make them rough and that scatters the sound so they are a little bit weaker, but it is more dispersed. That is why you see knobs and bumps on some of the surfaces. It can easily be overdone so we limit the surfaces that we diffuse sound so that it is meaningful diffusion. It is not arbitrary spraying of diffusing surfaces everywhere. It’s meaningful diffusion and it can actually contribute to the architectural ensemble of the room as a whole.

There are two schools of thought. One school of thought is that the architecture and the room acoustics are natural enemies. That vision always predominates over sound. We completely reject that view.

On the other hand, every building conveys meaning. There is a rhetoric in the story that the building tells to the people who are going to use it and that meaning can be shared between the acoustician, if he is also an architect, as I am, and the designing architect. And that sharing of meaning is the site at which a meeting of minds can take place. In this room it is really quite unique because it has a double space. It is two nested spaces, one inside the other. The outer space has a really important acoustic function for the reverberation and the inner space, which is formed by the seating and the close surfaces, is designed to produce the gratifying sense of development and clarity and strength, all of which are well known in this room.

It is always such a pleasure to come back and hear the sound in here because it is very good. At the meeting with Jean Nouvel (it was actually in Biarritz, would you believe) in the hotel in Biarritz, I sketched the idea of the nested spaces and because Jean had the idea already that the outer space would be the way into the inner space, so that people would actually move through the outer space on the way to their seat, it was a meeting of minds. And so this wonderful space occurred through a meeting of minds with Jean and myself.

Room acoustics merges the psychology of what we hear with the mathematics of how sound behaves in spaces and that, of course, is a branch of physics. So all of those disciplines are necessary.

Another factor which is not a scientific discipline and which this room has in wonderful measure is presence. A really wonderful space has a presence which is immediately apparent when you enter it. I’m sure you feel it here. Presence appeals primarily to your senses not to your intellect and it’s really a counter to the Cartesian view of the world that has dominated since the Enlightenment, you know cogito ergo sum well I would say sentio ergo sum; I feel therefore I am. And that’s why the theologians are particularly interested in the idea of presence so the usual attendances are in the high 90% and that tells you a lot about the room. People enjoy coming here and irrespective of the genre of music, the room is still full so this means that we have succeeded in making this part of Paris a hub for musical endeavour.

After three or four years, when it is in continuous use then you start to understand simply because of the way it is used whether it is a success or not. If you have attendances in the high 90% for virtually all the functions you have here, it means that you have won.” 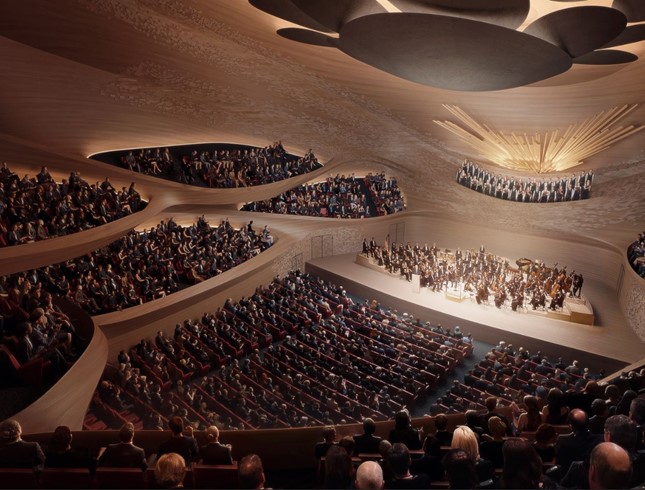 We are pleased to announce that Marshall Day Acoustics is a core member of the team, led by Zaha Hadid Architects, that has won first prize in a major design competition for a new performance venue for the Ural Philharmonic Orchestra in Yekaterinburg, Russia. The design creates a performance hub with a new 1,600-seat concert hall and 400-seat chamber music hall, while also incorporating an existing 700 seat venue.